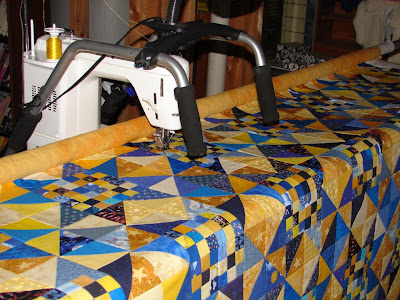 Blue-n-Gold Pride has finally been loaded onto the frame, and a few paths completed. The nice reality now.... anytime I have 10-15 minutes, I can go downstairs, turn the machine on, and get a path or two finished. However, a comment from Paul sidetracked me today from further quilting on BnG Pride. 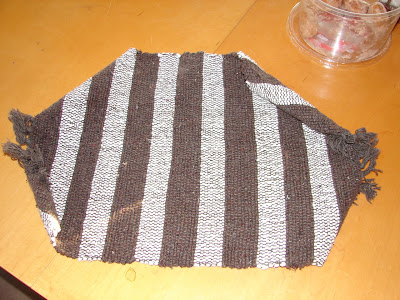 These annoying things!!! Paul bought them a few months ago; we never had used placemats before. I kinda rolled my eyes at him at the time, and said...whatever.

However, I have learned....I really like the benefits of having a placemat. 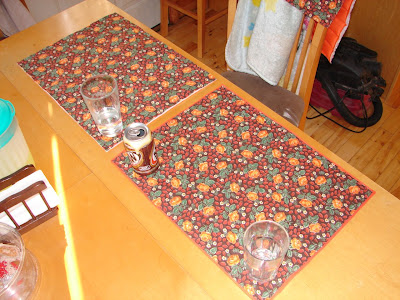 So, I went downstairs and dug around to see what fabric I could find. This chosen fabric is a heavier selection that was buried in one of my many donation boxes; it reminds me of a heavier decorative fabric (upholstery or such). 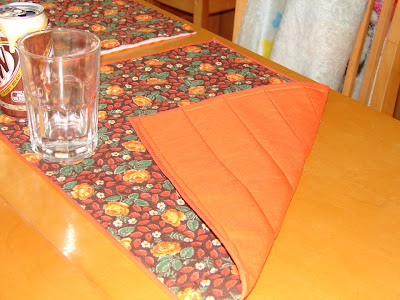 As you can see---nothing fancy-schmancy at all! Just mere function at this point. Then....later on when I really get inspired, I'll see about coming up with something nicer.

I figured these would be good for now. Orangey-autumn colors (AND I burned through some ORANGE for the Rainbow Scrap Challenge --even those these aren't scraps.)

Speaking of Autumn-----we are having UNSEASONABLY warm temperatures!!!!!! We've had 8 days of 80+ degrees so far this October!!! (The 5:00 news just stated that this hasn't happened since 1953). That is just NOT-NORMAL for us northern states. However, this "borrowed time" will end by mid-week, and then we'll be back to normal (and even BELOW normal temperatures!) :0( So, my half-marathon next weekend will be NOTHING like the Chicago marathon today; temps are predicted for 50s (HIGH), which means.....30s(???) at the start????
Posted by Amy at 5:01 PM

Blue and Gold is looking fantastic! Your new place mats are perfect for the season and go really well with the wood of your table.

Use those placemats Paul bought as a fabric for the top and find something for a back, and stitch them together like you did with your orange ones.

Enjoy the nice weather, snow will be right around the corner.

So glad you enjoyed a little quilting time this weekend.
How's the gardening? I plan to finish up the garden tomorrow and put it to bed for the winter.

I'm getting close to putting placemats on the table. I'm sure it will freak my husband out, but he isn't the one who has to scrub dried food off the table from the kids. I'd prefer to let the washer do the work.

Your Blue-n-Gold Pride looks just great. And I really like your placemats too. Nice fall colors.

I really love using quilted placemats. I often will tryout a new pattern for a pieced block by making a couple of placemats for everyday use. They dress up the table and are easy to keep clean - just throw them in the washer.
Linda in Southern Illinois

I love the blue and gold!!!! Congratulations on the finish!

I like the placemats...maybe I need to make some of those! Smile. Blue and Gold is looking good too!

Amy
Wisconsin, United States
Super energetic, hyper, mathematically delicious individual with a loving husband, and three equally energetic girls (16, 13, 11). I have a strong passion for every aspect of the quilting process, with crochet nearing the same level of passion! We all have our spurts of obsession and need to find a balance, so grab your coffee and enjoy!!!