Well folks, the tomato transplants from last weekend were looking a bit sheepish all week long (SADLY!), although a few were hanging on and showing new growth on the tops.  However, it would appear that last night's frost finally did all of them in :(
Forty-five plants, three months of pampering, bags of soil, and hours of transplanting seem to have gone down the drain!
Lesson learned!  Next year:  April 1st!  That's it!  April 1st!   No earlier! 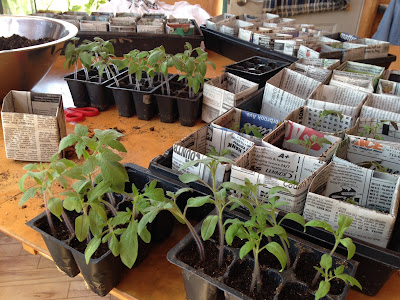 THANKFULLY, two weeks ago, I finally got around to planting some 'insurance policy' tomatoes in the event that my 'crazy-early-planting' tomatoes ended up dead in their transplanting tracks.  We have a little bit of a head start on fifty-three more plants.
In all actuality, we aren't any further behind than what we normally are at this time of the year.  It's cold up here!  This simply mean that the tomato harvest will, once again, need to happen once we're back at school in September.  **Shrug**   Truly truly, 'better late than never.'
On the flip-side, a conversation with Paul today may lead to a transportable hoop house or small green house being built this summer.  ;) 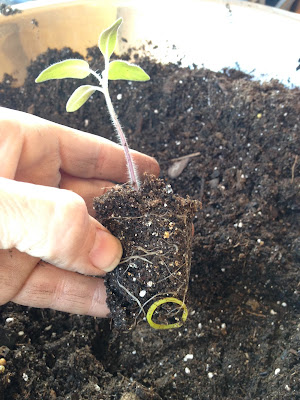 Hm.  Looks like my lil' planting helper wanted to see if the tomato roots would grow into a pony tail??? 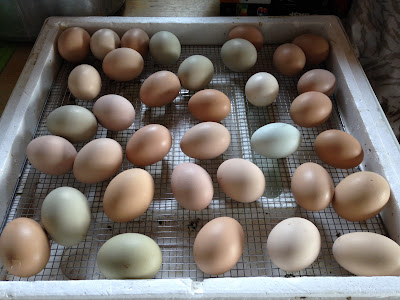 Today marks day #18 for our incubator eggs, so they were removed from the automatic turner and placed into their final hatching position.
Take a closer look at the egg in he lower left corner... 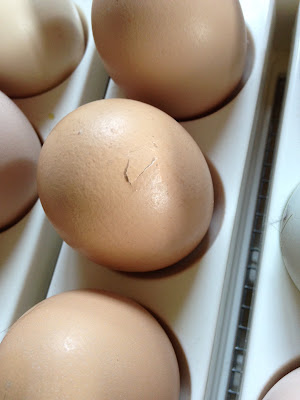 One lil' guy seems to be in a hurry to be the first born.
In the next couple of days, I expect a couple of dozen lil' chickies :D
Posted by Amy at 9:30 PM 3 comments:

After spending hours planting portions of the garden last weekend, we sent up a simple wish for warmer temperatures and mild rain. 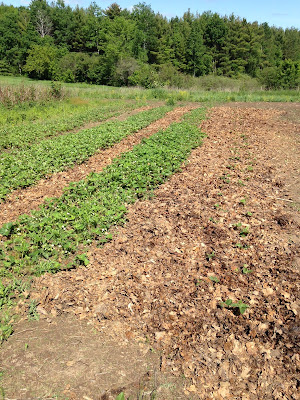 The strawberry patch was beautifully and dutifully weeded and mulched yesterday.
All week long, the temperatures have been typically decent, and the order of rain came through, but....... FROST last night.  Dag-nabbit!  We woke to a light frost this morning;  and the strawberry blossoms are now at-risk since we didn't cover or irrigate.  Drat. Drat. Drat. 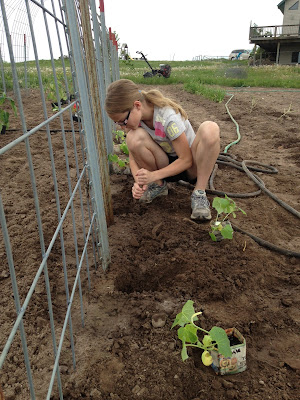 Caitlyn and I covered the cucumber plants we had transplanted last weekend, so they should continue growing nicely. 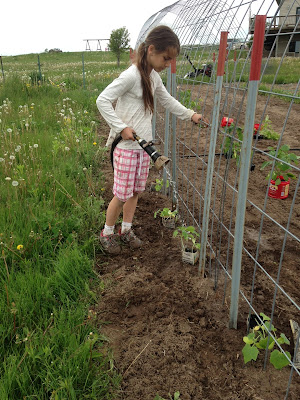 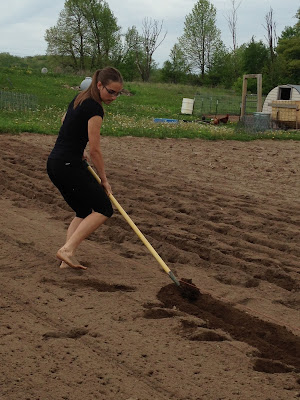 Cassie had taken charge of planting corn.  Clearly, we continue to await for the ground (and air) temperatures to increase and stabilize before hoping for any germination. 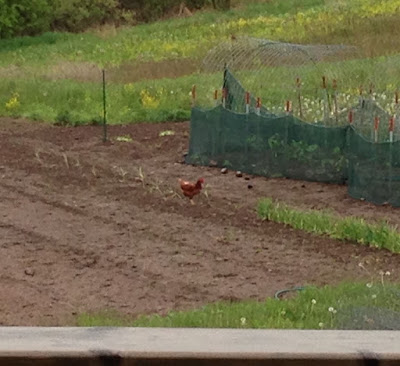 The broccoli didn't have to worry about rain OR temperature since SOMEONE couldn't pass up the fresh leaves of the new transplants.  Grrrrrr......  EVERY LEAF -- stripped away! 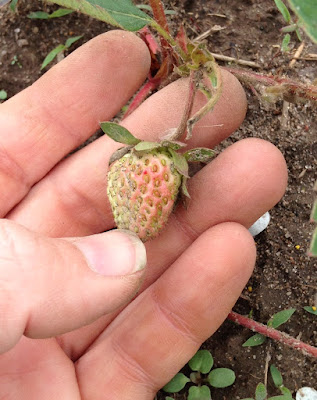 And since my chickens can NOT pass up these delicious snacks, we need to come up with a simple fencing solution for our strawberry patch.  Otherwise, we'll lose any berries to our chickens that may end up surviving this frost. 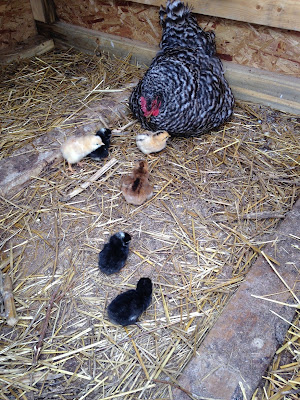 In other news.... Mama Rock has successfully hatched out six babies on Thursday/Friday.  We expect to see another seven coming home from Caitlyn's classroom incubator this week (we offered some eggs to the class incubator), and we're hoping Mama will embrace them as her own since they are essentially the same age (3 days apart).
Additionally, OUR incubator is coming due anytime over the next 3-4 days;  thirty-three eggs, which we do not plan on handing over to Mama.  LOL.  Instead, they will be raised as a new 2015 flock to be complete with a new coop too :)  (YET to be made).  The jury is still out on whether another full set of eggs will be placed in back-to-back incubator hatchings.  The vote in leaning towards, 'ya better start setting some eggs aside when you perform your daily collection.'  ;)

On the quilting front, a few hours have been spent in front of the machine when the weather has been less than garden-worthy. 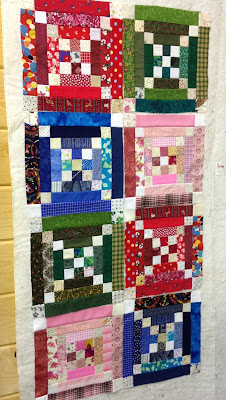 Rainbow Scrap Challenge updated a little bit;  I'm still shy of a couple of colors, but I'm 'ahead' with the red.  ;) 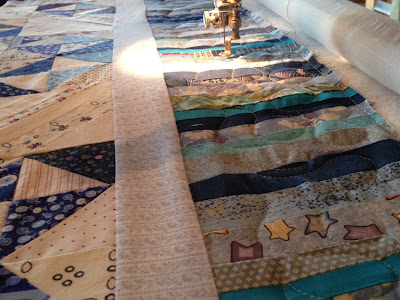 A new deadline project for a customer has been loaded on the frame;  Bonnie's Jamestown Landing, one of my favorite designs she's come up with! 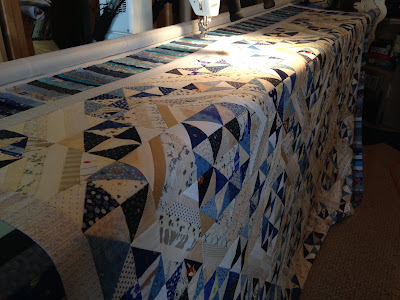 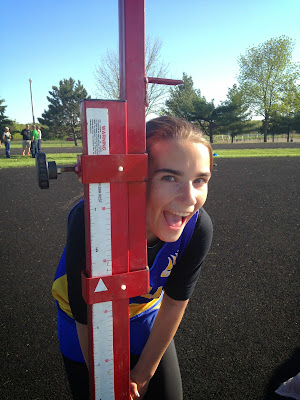 Cassie's ended up having lots to be happy for at her Conference track meet was this past Thursday.  She's been plagued with a nagging back injury for much of the season, and has unfortunately found herself sitting on the sidelines for many of the meets this year.  However, the downtime paid off and she was at her 100% for the Conference meet. 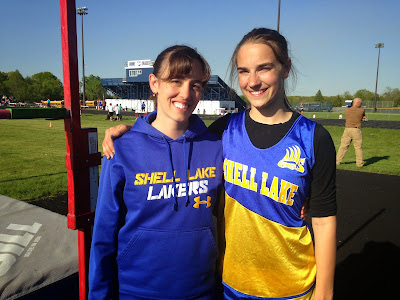 She started the day by taking 1st place in the high jump.  All of the competitors scratched out at 4'6", so the officials asked if she wanted to keep jumping.  With no pressure on her, coach gave the okay for her to keep jumping.  Neither Cass or myself knew the heights the bar was being set at; she just kept jumping.  Oh that sneaky coach!  In the end, Cassie tied the Junior High high jump record of 4'10" established by, none other than, her track coach 10+ years ago.

While on cloud 9, she moved over to the Discus area and set a new PR of 79', moving into 2nd place on the Leader's board, and then, when she was called for the 400M, she continued her record-breaking evening by running a 1:04.06, breaking the previous record of 1:05.4, and leading by over 4 seconds from the rest of the competition.  Yes, folks.  She's still on cloud 9, and I'm super super proud of her!! 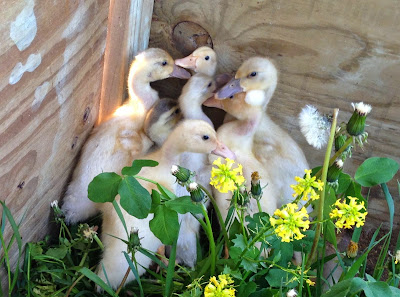 The 8 ducklings we hatched out a couple of weeks ago have moved into a ground-brooding box. 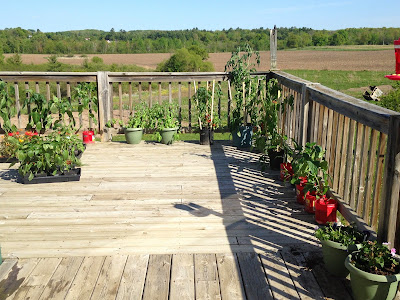 The plants I began as seeds in February have finally been able to be moved outside to the deck indefinitely. 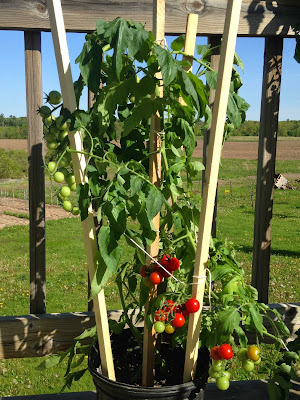 Cherry tomatoes already being harvested, as well as peppers :)  Who said people in Wisconsin can't have two growing seasons?!?!  ;) 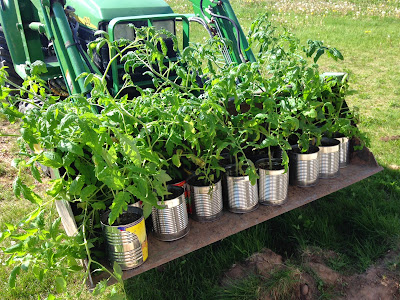 But now, we need lots of finger-crossing for all of our other tomato plants that have been hibernating in the basement for the past couple of months to see if they survive the transplant into the garden.  I've most definitely learned my lesson -- starting plants in February (tomatoes, specifically) is NOT in the best interest of the plants OR myself.  But -- forty plants were transplanted into the upper garden yesterday;  about 12 more wait patiently for more fence posts to be purchased.
(Mind you, we started 56 new plants last weekend from seed -- just in case ;)  I guess we're going to have two growing seasons in Wisconsin this year ???) 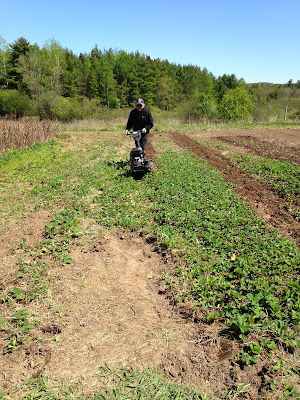 The strawberry patch was expanded and tidied a couple of weeks ago... 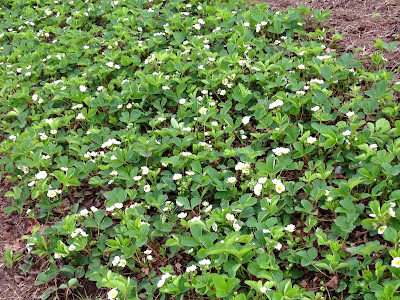 ... and the blossoms are popping up in exponential rates.  In another 3-4 weeks, we should expect berries.  GOOD!  We just opened up our last strawberry jam container! 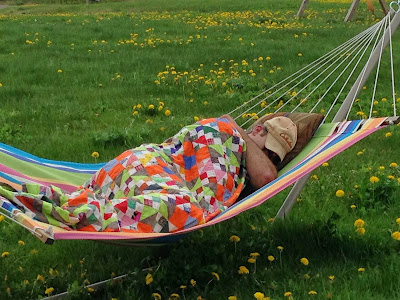 There's a saying....."there's no rest for the weary."  However, when the weather cooperates, taking a snooze in the hammock given to us by my parents was on Paul's mind before needing to start his night shift.
The yard is purposefully being left un-mowed, waiting for the dandelion season to pass.  Yes, yes... the bees' food takes precedence over a 'pretty-looking' yard. 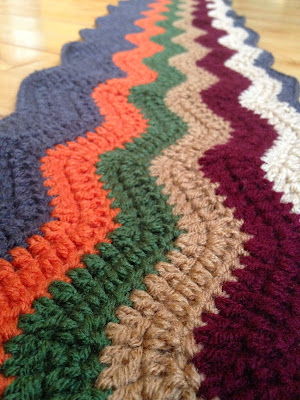 The only crafting project I've been giving time to is a new afghan man-ghan for Paul.  A couple of months ago, I was sequestered into making a large queen size afghan.  Paul fell in love with the weight and size, so.... I took that as a hint ;)  At a width of 106", I predict the project taking most of summer to complete.

Today:  more gardening and planting.  Perhaps my blogging time will become more consistent again;  two weeks of school left for us in the northwoods!
Posted by Amy at 9:38 AM 5 comments:

Oh dear, faithful readers out there (if any of you remain).