Hi everyone!!!!!!
Yes, you betcha, absolutely.....
Can you believe it??  Amy spent some time back in the quilting room!!!!!!
;)
Before I started up the official 'tracking clock,' I spent about 15 minutes cleaning up other crafting messes that my girls and myself have made over the past month.  I've been using my cutting mat to trim the labels for my crochet items, and my girls have been digging into my 'not-so-good' stash, making small pillows and bags.  There were cluttery messes all over! 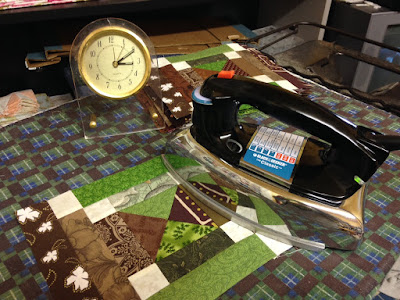 My only focus today was to try to finish up all 28 connector blocks in the Smith Mountain Morning - greens project.  There were a few final brown strips that I needed to cut from scraps in order to complete the two brown 7.5" side strips before being able to press and move to the greens. 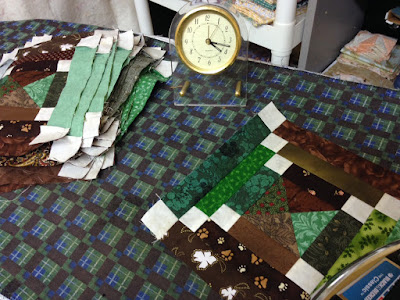 Hour 16 came and went, all the while pressing and cutting 56 green strips, piecing the 112 small white squares, and finally sewing them onto the blocks. 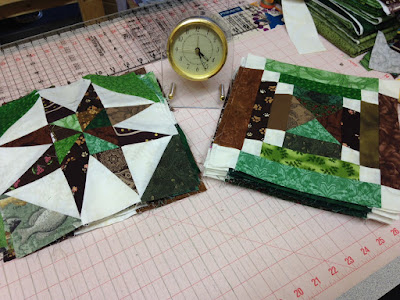 16 and a half hours in -- all 28 connectors blocks and star blocks are sewn, pressed and ready for assembly into a quilt top center! 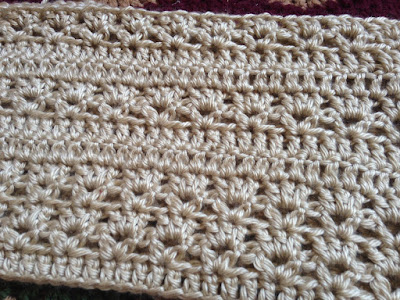 In typical Amy fashion, while sitting and looking around my crochet area last week, I was feeling burned out with my smaller cotton-yarn projects.  I have plenty of washcloths, the hat pattern mojo was wearing off, and my king-size manghan for Paul was giving me a small "I'm-done-with-you-for-now" moment.
So... off to Ravelry I went for a little inspiration...
The Country Cozy afghan pattern had been in my favorites for quite some time.  The examples shown weren't really sparking any magic, but when I started looking over some of the completed projects.... the single color finishes were fabulous!!!
I've been wanting a creamy-ish colored, single color afghan ever since I first learned in 2013.  With a full skein of Caron's Simply Soft 'Bone' sitting on my shelf, I was set (albeit, short lived.  The skein was emptied by day's end).

The garden has been processed for the week already, with much thanks to my MIL.  She processed up a case of potatoes (quarts) and a couple cases of carrots (pints).  The tomatoes are kinda stalled, so I don't have any of those to worry about today.  Digging potatoes hasn't really been on my todo list for all the years we've had a garden;  Paul usually handles that duty, so I'll continue thinking he'll take care of them.  The remaining carrots can wait until we decide what we want to do with them all.  The cabbage also awaits Paul's decision.

So.... with the Packer game coming on shortly, and ALL of my school work already finished for the weekend... I simply hope to kick back with some crochet and cheer the Pack to a victory over the Bears.  (and fret not -- I have some newly acquired Bone yarn for my Country Cozy!) ;)

Rather than thinking that the summer has come to an end, I've accepted this time change as "School begins!" 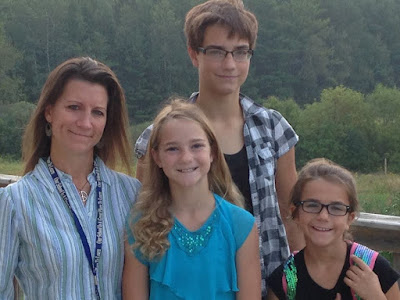 I've even started running again!!!!
Mind you, PART of that decision came when I organized my closet two weeks ago, trying EVERY item on.  I parted with quite a bit, but also added a lil' bit due to a Goodwill shopping spree.  SOME of my pants are a bit too snuggy-snug right now, so...... back to running to burn that lil' layer of pudgy-pudge! 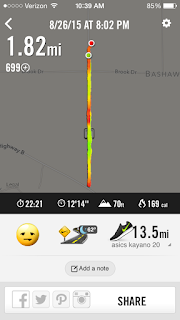 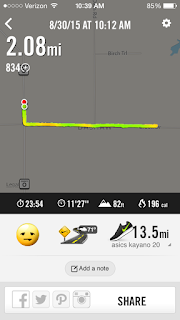 Last weekend a small collection of tomatoes were ripe for the picking, and I made up a batch of salsa.  After a week of HEAT and HEAT and more HEAT, mixed with loads of HUMIDITY, our tomatoes started taking off.  (um yah, that heat in a classroom with zero AC this past week ---- UGGGERS!) 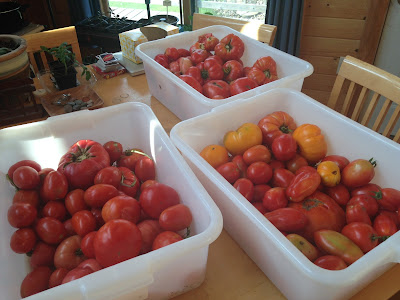 Caitlyn and I gathered up what was ripe;  it ended up being a decent ~70 pounds, with lots more out on the plants yet!     Since the heat is still barring down on us, I was NOT interested in having the stove/oven on for much of the weekend in order to reduce these babies down to a sauce, so instead... Vegetable juice was the plan!  We'll save the sauce-making for next weekend with our next ripe pickings; it looks like this heat is finally breaking this week.  Whew! 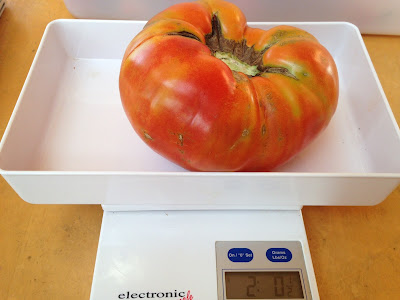 I have a few different varieties out there:  Abe Lincoln, Polish Linguisa, Red Oxheart, Viva Italia (my FAVORITE for sauce), and a few IDK heirlooms that we received as seed from our neighbor two years ago.  We've planted a few of the 'mystery seeds' each year since we've had them;  they make LARGE tomatoes.  I didn't weigh any last year, but I want to believe that this is close to the largest we've had.  There have been two others I've weighed as well:  one was 1 lb 10oz, the other was 1 lb 12 oz.    It doesn't take many of those tomatoes to add up to a lot of juice in a little time.  ;) 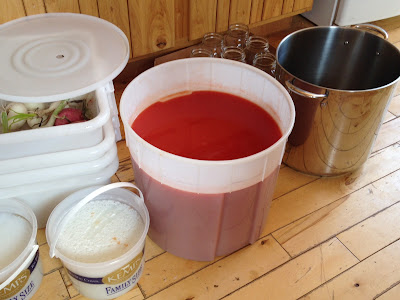 After the morning of processing, we filled two full cases of quarts of Vegetable juice (tomatoes, carrots, onions, celery, parsley, peppers).  We no longer preserve straight tomato juice; we prefer the flavor of the veggie juice.  My in-laws like using the juice in Bloody Marys; I'm not much of a fan, but I LOVE using this juice throughout the year for Chili!

I'm SO thankful for the long holiday weekend;  it's always nice having a slow 4-day week start to the school year;  this year we have TWO 4-day weeks to start since we didn't start until this past Tuesday, Sept. 1.
I've used a bit of the available time to organize a bunch of my recent crochet finishes in order to have them ready for my MIL and some craft fairs she'll be participating in. 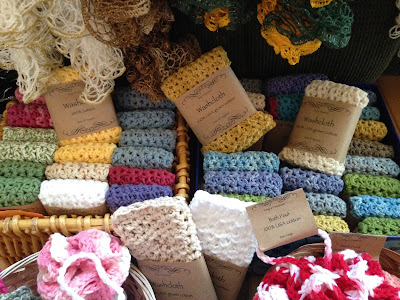 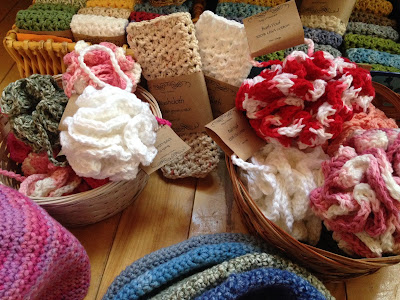 Bath Poufs have been a new addition to my collection: small and large sizes 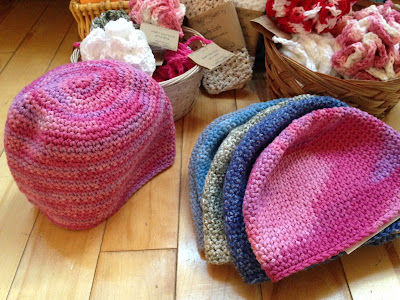 Hats have also been a new addition this year, in a variety of sizes ranging from youth M to adult S. 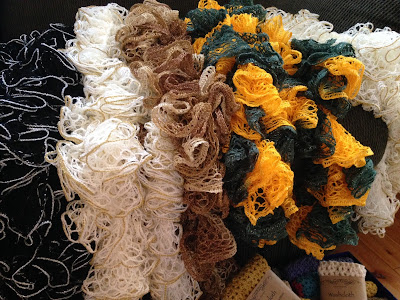 A bunch of the frilly yarn was still sitting on my shelves, so I found time to get those made into the frilly scarves, plus I still have some left;  I may just bite the bullet to buckle down and clear this yarn out completely.

However, I really really really am thinking of getting downstairs into the sewing room later today.  It's been a month since I've quilted!  If not even longer!  I've fallen behind in the RSC'15, and I can't let Andee down seeing that we decided to team up in a project together :D  And my Smith Mountain Morning in greens is still sitting, waiting for its 14th hour of progress.