Nightmares, school and some gardening

Last night, Paul and I watched the movie "Taken" until 11:00PM and then headed to bed.  We had already seen the movie, but it must have stuck with me again, because at 11:21PM, Paul placed his hand on my shoulder, and asked me if I was okay.

Gosh!  Was I RELIEVED that he did that!!!  I had fallen asleep quickly (for ONCE!), and I was having a doosey of a nightmare!  Have you ever driven your car when you know you shouldn't have because you were so tired??  Well, a dream must literally have started just as I dosed off, because it started with me in my car, driving....and resisting that feeling of falling asleep.  And I couldn't fight it; I dosed off just as I approached my driveway, and I kinda "tilted" into my garage sideways; I could hardly keep my eyes open.  And from somewhere, Paul materialized ...and we were in a cellar/basement.... I started heading to a basement stairwell to get up to the main floor to turn the lights on;  they were off.... and Paul closed the car door putting us in complete darkness.  I turned to talk to him to open the car door again so I had some light to manuever the stairs....and I reached the top, opened the door, reach around to find the light switch....and ARMS wrapped around me!  It wasn't Paul.  And I couldn't scream....I started breathing heavier...but no scream would come......but my mind was thinking that if I breathed hard enough that Paul would come running to the rescue..

and that is when Paul touched me and asked if I was okay because I was breathing just has quick and panic-heavy in real-life.  I can't remember the last time that a dream/nighmare FREAKED me out so badly.... but this one did!  It was that sheer frozen fear panic ... that I couldn't scream out for help.

So, are you a dream analyzer?  Does this dream have deeper meaning than just a simple "Taken" movie?  Is the anxiety and pressure of school starting getting to me?  ... something else?.....

A GOOOOOD morning at school!  I planned out my first "flexible" week's schedule for all my classes;  I debugged and learned a few more things with my new calculator Navigator software, and by 11:50AM, I was ready to head home.  Feeling happy :)

Once at home, I needed to dump some scraps into the pig's trough, so I took a moment to look around the garden.  I haven't been in the garden for quite some time!  My allergies have kept me locked up, and with the whole lack-of-motivation going on last week, ...yeah...nothing has been touched in over a week.

After lunch, I sucked it up and headed outside with girls in tow!  (And know this:  I have NOT taken my allergy meds for a few days because they dehydrate me so badly!  I have had 'cotton-mouth' for the past week and NOTHING had been touching the severe thirst-ugh!) 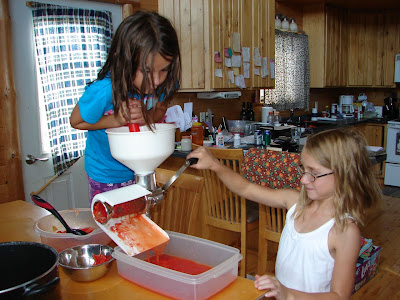 An afternoon of cutting tomatoes, cooking tomatoes and seasonings, and food-milling....

lead to a HUGE pot of "seasoned tomato sauce" in the making. 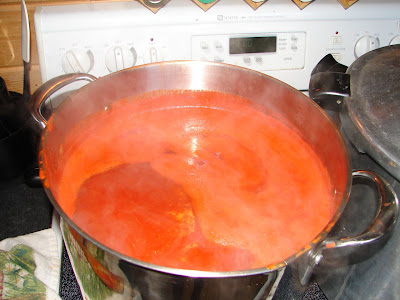 I fear I started this too late, because the sauce didn't start its reducing stage until after 5:00PM :\  I haven't made this recipe before, and NEVER this much, so ... I'm kinda wondering how long it is going to take to reduce this amount.

Ah well..... tomorrow, I am not going to school!  I don't know exactly what's on the schedule yet, but NOT school!  We still have some school shopping to do;  more tomatoes are calling my name; the Quilt-for-Kids tops are waiting the quilting-phase.  Plenty to choose from.

OH!  And the whole allergy business...  :\  I've gone through half a box of kleenexes this afternoon.  Ugh. Ugh. Ugh.

I am not one with huge allergies in my family, Ryan is so bad he sees an allergist though and Kurt suffers seasonally. They both swear by Nasonex. It builds up over time but seems to do the trick for them. As for the dream -- wow! Sounds like serious anxiety. I am hoping this school year will be a good one for you. It is surely yor turn.
Oh, when you said you were headed out to put scraps I the trough, I was picturing fabric scraps in a big bin for a giant quilt-- shows where my mind goes.

If it's taking too long to reduce, what about dividing it into 2 pots, thereby reducing the volume to surface ratio.

Or do you have a big turkey roaster that will contain the sauce and fit over 2 burners, increasing the surface area?

My allergies haven't been bad this year, usually terrible this time of year. I'm not sure if it is what helped, but I took a teaspoonful of honey(local honey) every day much of the winter and spring. People told me it would help. Like I said, not sure if it's what helped, and knocking on wood that they don't get worse again now! If you'd like to try it I can get you a jar of our honey, someone has bees on our land and gives alot of it every year!

As for your dream, you not being able to scream usually indicates helplessness or frustration in some kind of situation or with somebody. Find out what is bothering you and it will make that all go away. Could be just the fact that you feel helpless against your allergies? Or the schedule you have at school, you did mention something about the only flexible week.......maybe you don't like them be so NOT flexible. The movie probably didn't help any of it either. I had to quit watching intense movies like that before going to bed, because I would have massive nightmares, for days at a time.

Your dream sounds a bit like sleep paralysis, which is something I suffer from. I daren't go to sleep too quickly, or doze off in the morning or sleep during the day because that seems to kick it off. I dream that I'm doing things but that I can't move or wake up and it's scary. I've read that trying really hard to wiggle your fingers and toes helps to get your brain moving again. And scary films don't help either. Local honey is said to be good for allergies, as Melissa says, though I swear by Beconase, though what it's called in the USA I haven't a clue!

I have had good luck putting tomato sauce in a large roasting pan and leaving it in the oven overnight on a low heat to reduce. Worth a try when you are overwhelmed!!

Maybe it is time to try a different allergy medicine or even a nasal spray. Your dry mouth could also be a sign of some other medical problem like your Thyroid levels may be off.

I did have a dream one time and screamed right into Kevin's ear.... scared him half to death.

Hope you are feeling better soon!