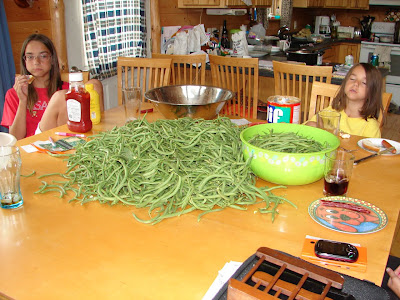 Thankfully I had 20 minutes of open time this morning before needing to head out to Cassie's eye appointment for me to wind up one more bobbin and quilt the final 2 passes on Julie's quilt.

After her appointment, we spent 2 hours picking beans and 2 hours of cutting them up in preparation for canning, and I elected to spend some time in the garden cultivating around the tomatoes, beans and cucumbers while the girls were left alone for a bit with the beans.

And then those blasted swim lessons got in the way!  1:30 - 4:30.  I KNOW they're important, but.....well suddenly I'm feeling the pinch of procrastination on Julie's quilt....and the garden is coming in with full force.  {{And now I suppose is when I can admit to the fact that I DID snooze for a few minutes in my chair while out at the beach!}} :D

Once home, it was a classic cardboard pizza dinner night!  Then Paul and I hit the garden again.....Julie's quilt STILL remained untouched......

Around 7:00, I finally finished my watering of the tomatoes while Paul worked on the netting/fencing around our tomato area.   Our chickens are finally being naughty!  They found my tomatoes!  And those red delicious goodies are too much for them to resist;  they've helped themselves to a good dozen over the past couple of days.  And even though we will have tomatoes coming out of our ears in a couple of weeks (we have a tendency to plant WAY more than we need; have you noticed?), I'm still not okay with them just taking what they want.  Paul had all of his stuff under control..... so I finally headed in.  I HAD to spend some time on her quilt!

But first....a shower.  I wasn't about to touch her clean quilt with my filthy self!!!!

Well, I DID take the quilt off the frame.  I DID trim up the quilt.

So....am I pushing my luck???  I mean....I'm down to 24 hours!   But I have to believe that after a good night's sleep, I'll be freshly energized and be able to push to the finish line.  I really should only need about one hour for it to be done with binding (machine) and label.
Posted by Amy at 8:36 PM

Holy Beans Batman!!!!!! I know you're tired of them, but think of all the yummy beans you will be enjoying in February. And no worries, you will get the quilt done on time.

Even the energizer bunny needs to recharge her batteries from time to time. The quilt will finish much better after a good nights sleep. SO many beans! I hope they are yummy.

What a pity your chickens don't seem to be going for the beans instead! Hope you get some time for a bit of a rest soon.

Wow - that is a big haul! I am finding that my pole beans are doing much better than my bush beans this year.