Those garden gnomes MUST have sprinkled me with motivation dust while sleeping last night!!!  Almost 12 straight hours of garden/harvest/preserving work!  And I'm not even completely exhausted :D

Once the pizza sauce finished up its hot water bath, the girls and I headed out to the garden to start picking and shucking corn.  After weeks of beans, the change of pace was nice!!!  Even the girls didn't seem to mind this task;  it really wasn't that bad. {{Plus it helped that it was overcast and cool out today!  Upper 60s}} 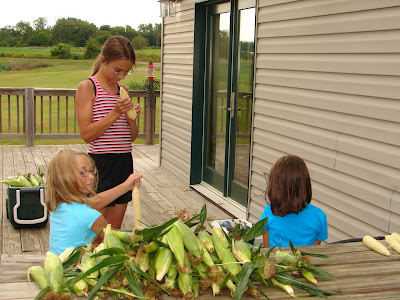 We had a good assembling line going.  I helped with the shucking while the water was heating on the stove for blanching.  Once ready, I headed inside to start the blanching/cooling task while the girls continued shucking. 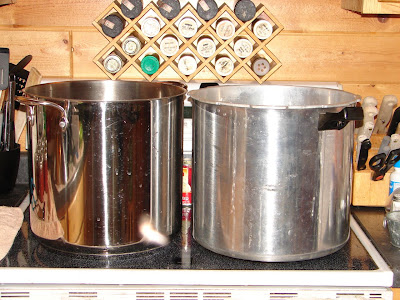 Yup---glass top stove!  Ignorance is bliss for sure!  Prior to this summer, I was unaware of the "dangers" and "No-No's" involved when it comes to hot-water bathing and pressure cooking (supposedly) with glass top stoves.
Hmp.  Well, this is my.......6th (?) year of preserving my summer garden, and I have yet to have my glass top shatter;  I have yet to deal with the burner not reaching the temperature required for hot-water bathing.  **shaking head**  **shrug** ??? Maybe I came away with a winner when we bought our top! 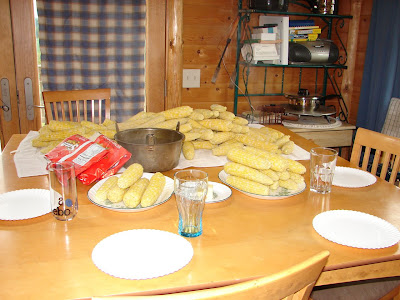 By lunch time, most of the corn was shucked and blanched.  And guess what we ate for lunch??!?!?!  :P

After lunch....cutting and cutting and cutting the corn off the cob.  I kept sneaking peeks at the Chinese/Brazilian beach volleyball match between cobs.  For a while there, I thought the Brazilian team was going to fall apart;  it was uncomfortable watching the time-out interactions between them;  they just seemed to argue too much for my liking (coming from a former coach). 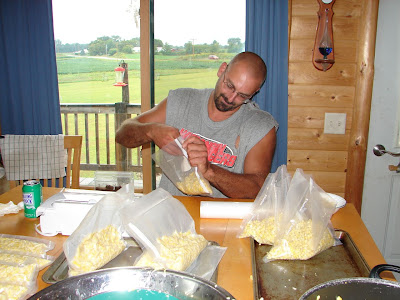 Even Paul helped out with the food sealer when he arrived home from work!  I'm not a big fan of the food sealer job;  I'm sure it's easy-peasy, but I've never done that part before and......I had just finished cutting the corn from the cob when he drove in the driveway....so it was meant to be :) 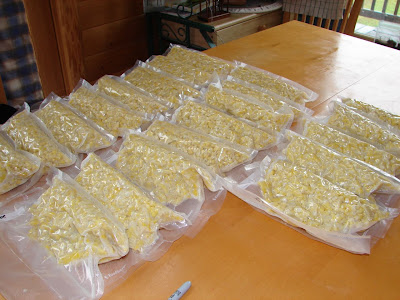 And I wasn't done YET!!!!
Go back up and look at the picture of the corn on the table for lunch.... See the angel food dish in the middle of the table?  I use that to cut corn from the cob;  the cob rests on the center-edge while I cut off the corn (with an ELECTRIC knife, of course!!)

Anyway...while cutting away, I tried to remember the last time I had made angel food cake.  No clue!  So, once the dishes were done up, the inspiration and motivation was still going strong.... I found a recipe online for homemade angel food cake.  (For those of you with chickens, this is a GREAT way to burn through a dozen eggs!!!) 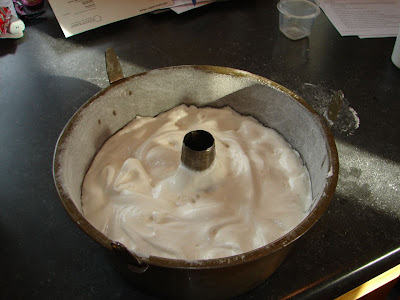 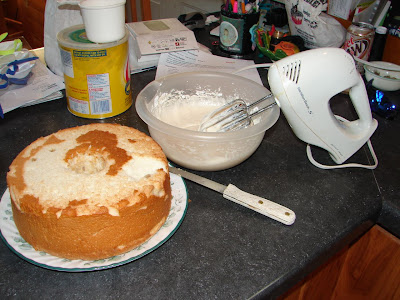 And of COURSE we don't have any frosting in the house, so I found a recipe for that too.....

and I'm waiting patiently for the cake to cool (while I write this post) so that I can DIG IN and finally put my feet up for the day!!!!  Oh yeah......dinner tonight:  Pork roast, mashed potatoes, gravy, beans, cob-corn (grilled)......ALLLLL from our garden/animals!  :D

Whaa-hooooo!  Ummmm......dare I say that I get to spend the day sewing tomorrow???  I'll have to check to see if any more tomatoes are ready-n-ripe, but those won't take all day even if there are some ready. 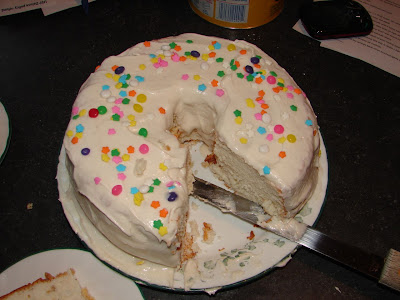 Busy, busy day. You deserve a big ole chunk of that cake. I get to freeze corn on Friday. I'm always so glad when that job is done for the year. Since there were so many replants of different sections of the corn patch this year I'll probably get to go through all the motions several times.

Lazy days of summer?! Sounds like an energizer bunny of a day. That cake -- yumo -- do some sewing so that I can live vicariously through you till life is back into the flow around here.

Wow I am tired now reading all that you guys did today. You have pigs too??? My oh My! I hope you have this much energy tomorrow as well in the sewing room so you can get lots done.

Other than ice cream cake, angel food is my favorite. I used to request it every year on my birthday...looks delicious. You ran circles around me today...I haven't done one thing but play on the internet since I got home from work. Glad one of us accomplished lots today!

Your corn is beautiful!!!

Now I am craving angel food cake! My favorite. :)

You deserve it after that day. something so satisfying being able to eat a meal you've grown yourself.

You baked a cake after all that work in the garden and preserving your corn? You're mad! I'm not too sure what angel food cake is but it looks scrummy.

Can I order a double handful of that Motivation dust please? It's working brilliantly for you - maybe it will with me ; - ) Well done on all the work.

Me and My Stitches said...

Seriously...you wear me out! If only I had a tiny bit of your motivation!